and he and his family's connections with Coleorton 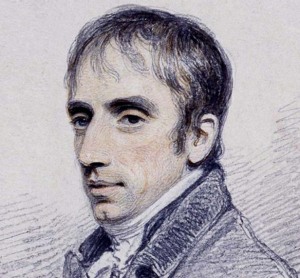 After school in Hawkshead, university in Cambridge and a spell in France, William met Samuel Taylor Coleridge and Robert Southey in Bristol. The three became friends of Sir George Howland Beaumont (1753 -1827), himself a talented artist and patron of the arts. William and his family became lifelong friends of the Beaumont family and stayed with Sir George and Lady Beaumont at Coleorton Hall on many occasions. They were often joined by other writers and artists, including the two other Lake Poets Coleridge and Southey. Lady Beaumont was godmother to William and Mary's daughter Dora.

Whilst engaged in building his new Hall (between 1804 and 1808) on family land owned since the fifteenth century, Sir George invited William, his wife Mary and his sister Dorothy to stay at Hall Farm. In 1806 William and his family arrived and lived at the farm. Whilst there all the Wordsworths attended St Mary's Church; churchgoing was something they didn’t do in Grasmere. In a letter he wrote to Sir George at his Grosvenor Square house in London, William was critical of the sermons given.

When Sir George was rebuilding and laying out Coleorton, William sent other letters with advice on what and how things should be done. In one he began his advice with:

laying out grounds may be considered as a liberal art, in some sort like poetry and painting.

Of the grounds of Coleorton Hall, William's poem of 1815 begins:

The embowering Rose, the Acacia, and the Pine
Will not unwillingly their place resign;
If but the Cedar thrive that near them stand
Planted by Beaumont's and by Wordsworth's hand.

The above and the poem written in 1811 which begins:

can both be found carved in stone in the grounds of the Hall. 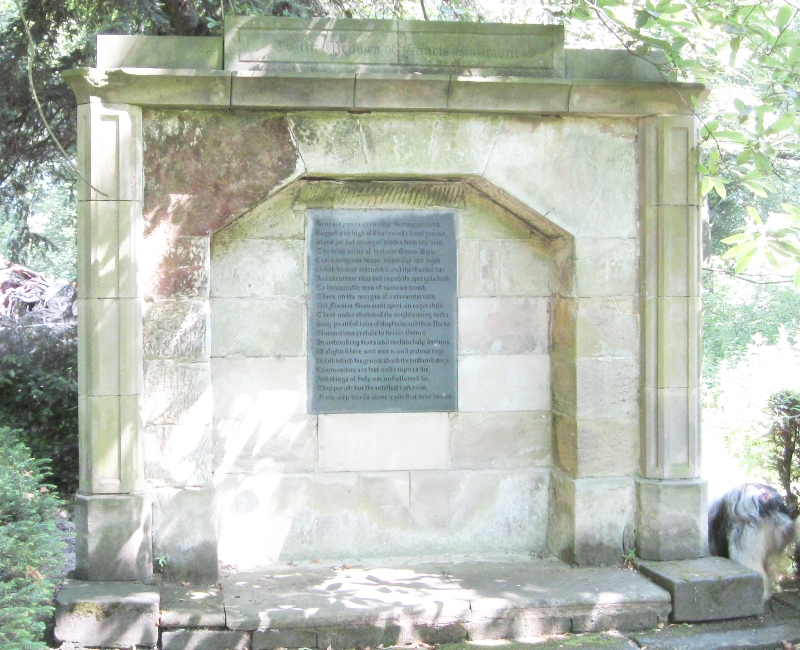 Whilst the Hall was being built and new gardens developed around it, Lady Beaumont asked Wordsworth to help her with the creation of a Winter Garden as part of this plan, on the site of a small old quarry containing builders' rubble. William agreed and approached the task with the belief work in the spirit of nature, with an invisible hand of art and sent his designs to Lady Beaumont. The finished garden included a pebbled floor depicting the Star of David, a stone cut alcove, an urn set on a pillar, a grotto, pool and fountain with shell work by Dorothy Wordsworth and a monument with verse composed by William in 1808.

In 1815 William dedicated the first collected edition of his poems to Sir George:

Hoping that this work, with the embellishment it has received from your pencil, may survive as a lasting memorial of a friendship, which I reckon among the blessings of my life ... some of the pieces were composed under the shade of your own groves, upon the classic ground of Coleorton.

The engravings of Beaumont's paintings that Wordsworth refers to are for: Lucy Gray, Peel Castle in a Storm, The White Doe of Rylstone and Peter Bell.

Nearly 25 years I have known him intimately and neither myself nor my family ever received a cold or unkind look from him.

In his will Sir George left William a legacy of £100 a year for life.

William's friendship with the Beaumont family continued after Sir George's death; he was godfather to Sir George Howland Willoughby Beaumont (1793-1845) the eight baronet's younger son William Beresford Beaumont, a later incumbent at the Rectory. He and his family were also friends with the Merewethers. Francis Merewether was Vicar of Whitwick and Rector of Coleorton from 1815 to 1864 and during his time William’s eldest son John stayed in both places as his curate.

After studying at Oxford University, John took holy orders and arrived, aged 25 in Leicestershire in 1828 and his godmother and aunt, Dorothy Wordsworth, acted as his housekeeper and helped to make his draughty Whitwick parsonage his home. During that time he was offered a living in Moresby near Whitehaven, by Lord Lonsdale and in a letter to a Mrs Marshall, Dorothy writes:

Nephew John has been offered a living elsewhere and has accepted it. Our rector Mr Merewether, is truly sorry to lose John, yet disinterested enough to be glad of his advancement. He will remain here six months longer, and I, of course shall remain with him. In fact, if he had continued here another winter, I should have done so also; as , in the first place, I am more useful than I could be anywhere else, and, in the second, am very comfortable. The walk to the Rectory and the Hall at Coleorton is not too long for a winter's morning call… it gives me great satisfaction to see that John does the duties of his profession with zeal and cheerfulness, and is much liked and respected by the parishioners. His congregations, notwithstanding the numerous dissenting meeting-houses, are much increased.

In a later letter to Lady Beaumont in January 1834, Dorothy writes:

…as long as I live I must retain affectionate and tender recollections of Whitwick and Coleorton, and shall be thankful if the day ever comes when I again set foot in the Hall and the two parsonage houses.

More about Wordsworth and Coleorton Hall at: