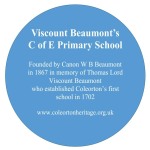 Commemorates buildings and sites in the village which have historic significance.

Landowners, miners, working families - all helped to make the social and economic history of Coleorton.

The two World Wars and conflicts before and since have taken their toll on Coloerton people.

Coal has been mined in Coleorton since the middle ages along with brick-making, pottery and spar bauble making.

Coleorton children have been lucky enough to have schools since 1702 - funded by Viscount Beaumont and also Sunday Schools run by churches and chapels.

In October 2019 we held a "Childhood in Coleorton" event which proved popular and many residents brought pictures and stories of growing up in the village.

Our "built environment" is changing all the time to meet the way we live.

Here are some of our houses and their history. >>