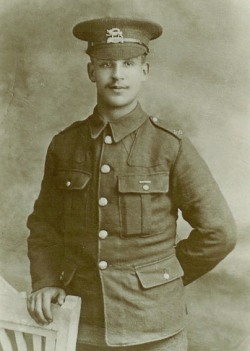 "Coleorton WW1 Roll of Honour" compiled by Terry Ward of the Heritage Group was published in St Mary's Parish Magazine in December 2018. It is a listing of soldiers from the Coleorton area who served in WW1. These include names not on the Coleorton War memorial for various reasons and also names of those who served and survived.

The list is inevitably incomplete because many records were destroyed in the blitz and also because the names of location and parish boundaries have changed. If you have any information or queries about these or other soldiers from the area we'd love to hear from you. Please email heritagegroup@coleorton.org.uk

I recently compiled a "Roll of Honour" for the Parish Magazine and Coleorton Heritage Group which attempted to list all those men who enlisted for the WW1 service who were either born in Coleorton or resident in Coleorton at enlistment. Information was taken from the military records on the Find my Past website, family history sources, the Coleorton War Memorial and the Coleorton Methodist Church memorial. The list included those men who served and survived as well as those who became casualties. A number of individuals on this list are recorded as killed in action (KIA) or died of wounds (DOW), but are not on the Coleorton War Memorial. This has prompted me to examine their biographies in greater detail. Read them here (pdf) >>