is situated Off the A512 (Ashby Road) near Coleorton Hall. It's signposted from the A512. 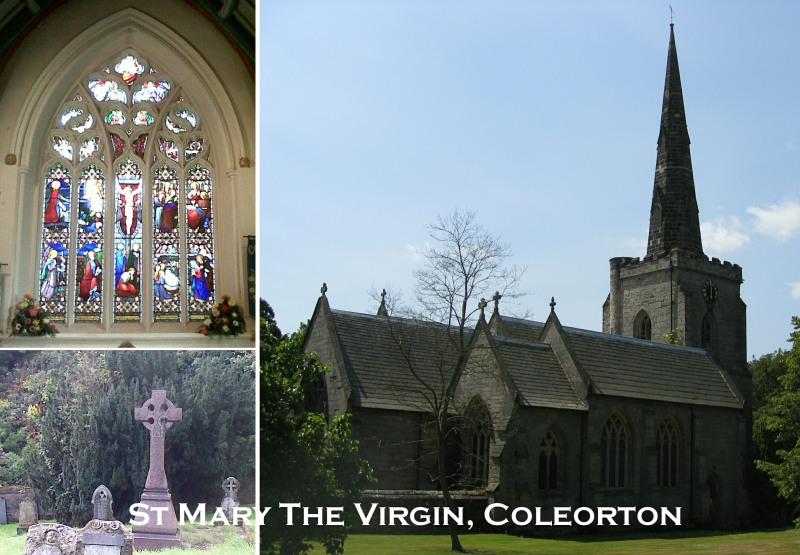 The church of St. Mary the Virgin is built of stone in the Gothic style. The western tower was built in the 12th century, with later addition of a fine recessed spire. The tower contains 8 bells, two of which, together with a clock, were added in 1873 by Sir George Howland Beaumont, 9th baronet and other parishioners. The bells are still rung regularly. The stained glass of the west window was brought from Rouen circa 1500 by a former Sir George H. Beaumont. In the south aisle, above the family vault, is the tomb of Sir Henry Beaumont ob. 1607 and Lady Elizabeth. There are other windows dedicated to Mr. Merewether, Sir George H. Beaumont and to the Rev. Canon W. B. Beaumont, rector during 1864-1901.

The Church, as was the case with many Anglican churches, was much restored during the Victorian period. The chancel and the extension to the north aisle are entirely of 1854 and were designed by the Derby architect Henry Issac Stevens. Also dating from 1854 are the east window, the font, pulpit and tower screen. A new organ was installed. The church can accommodate 250 seated worshippers. St Mary's is a grade 2 listed building.

So access is only via the "lych gate" and pedestrian path, rather steep, that goes up through the churchyard to the north door.

There are no longer any burials at St Mary's, however the cemetery at St John's is in current use.

Burials of members of the Beaumont family at St Mary's Church transcribed by Samuel T Stewart from information left in the archives of John Crocker.

An internal and external audit of the memorial tablets at St. Mary's Church, Coleorton transcribed from the archives of John Crocker (local historian) and John Nichols 1800 volumes.