Coleorton has had an interest in coal from the middle ages, with a good percentage of the residents relying on work in the mines for their living. It was therefore important news that Sir George Beaumont, 11th baronet, was investing in sinking two new deep mines at the New Lount site at Newbold. The expectation was to employ 1000 - 1500 miners within two years.

The incumbent Lady Beaumonts were often called into service for opening events, laying foundations etc. - like we'd have TV "celebrities" doing today. So the newly married Lady Renee Beaumont was invited to cut the first turfs for the sinking of the deep mines New Lount colliery in 1924.

When Francesca Beaumont Clarke visited us last year she brought the ceremonial spade that her Grandmother had used. 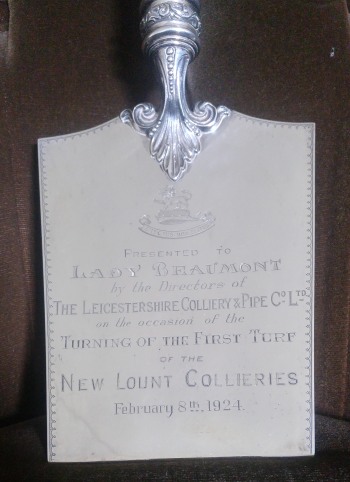 The blade of the spade is engraved:

Presented to
Lady Beaumont
by the Directors of
the Leicesteshire Colliery & Pipe Co. Ltd.
on the occasion of the
TURNING OF THE FIRST TURF
of the
NEW LOUNT COLLIERIES
February 8th 1924

The spade was made by William James Dingley in Warston Street in Birmingham in 1923. The blade is hall-marked as Silver, but there are no hall-marks on the other metalwork on the wooden handle.

The event attracted a lot of press interest:

New Lount ceased production in 1968 and is now a nature reserve with a Mining Heritage Trail.

We have launched "the Coleorton Blue Plaque" scheme to commemmorate buildings and sites in the village which have historic significance.

We publish articles in St Mary's monthly parish magazine and on the Coleorton website.

Read some of the articles >>