The last (12th) Baronet Beaumont died in 2011 without a male heir, so the baronetcy is now terminated. However, his two daughters still have fond memories of him, and his daughter Francesca came to Coleorton last November to visit her father's grave at St Mary's Church.

She took the opportunity of offering us some Beaumont family items which we really appreciate and treasure. One is a very fine ceremonial spade that her grandmother, newly married Lady Renee Beaumont, used to cut the first turfs for the sinking of the deep mines at New Lount colliery on 8 February 1924 (Read about it here >>). She also brought two ceremonial trowels that had been used by her family to lay the foundation stones for local National Schools. 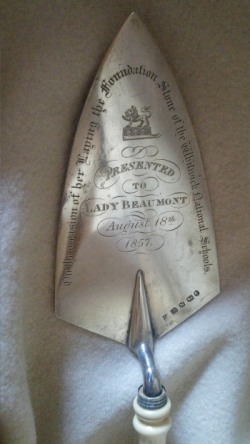 The trowel used by Lady Paula Menzies Beaumont, wife of Sir George Howland Beaumont, 9th Baronet, in laying the Foundation Stone for Whitwick National School on 18 August 1857 and again for the Swannington National School on 22 July 1861 with the inscription engraved on the other side. The trowel was made by Henry Wilkinson & Co in Norfolk Street in Sheffield in 1856, hall marked as silver. 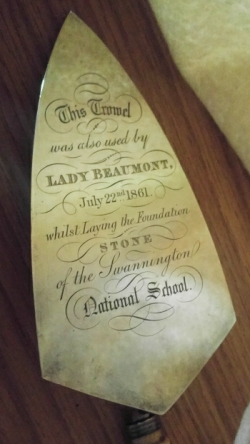 "This Trowel was also used by Lady Beaumont July 22nd 1861 whilst Laying the Foundation STONE of the Swannington National School."

The laying of the foundation stone of the new National Schools now erecting in this increasing village took place on Monday week. Although the day proved fine the attendance was not very numerous, and was chiefly confined to a few of the leading families in the immediate district. The schools, which are intended to accommodate 108 children, are in the Early English style of architecture, and are being built in brick and stone, and the expense is estimated at £700. The necessity for schools has long been felt in this neighbourhood, and the Rev. dr. Smith, incumbent of St George’s Thringstone, has for the last six years been collecting funds for this purpose. The ground, we believe, was given by the trustees of the Wigston's hospital, and a grant has been received from the Committee of the Council of Education. About £650 has been subscribed, the deficiency therefore is but small. Mr T.W. H. Miller, of Loughborough, is the architect. The design is to include a teachers' house, girls' yard, boys' yard, master's and teachers' garden. The school children having been drawn up on a raised platform in front of the stone, the proceedings commenced with suitable prayers, which were read by the Rev. Dr. Smith, after which, Lady Beaumont proceeded to lay the stone in the customary formal way. The silver trowel used on the occasion was the same as was given to her Ladyship when she laid the Whitwick National Schools stone four years back. The mallet and square, which were made of oak, were the gift of the Architect. After a hymn had been sung the Rev. Dr. Smith addressed a few suitable words to the assembly. After another prayer had been offered up, the proceedings terminated with the 100th Psalm. A collection was made at the close, but we have not heard the amount. An excellent cold luncheon was provided in an adjoining tent, but no more than twenty persons sat down. The Rev. Dr. Smith occupied the chair. After the usual loyal toasts the rev. chairman gave the "Bishop and clergy of the diocese," coupling with the toast the name of the Rev. R. Dalby. The Rev. R. Dalby responded "The health of the Rev. F. Merewether" was next responded to. The rev, chairman then proposed "The Health of Lady Beaumont, who had so kindly attended that day to lay the foundation stone". The toast having been drunk, and there being no one present to respond on her behalf, the rev chairman undertook the duty himself, and in a very humorous speech referred to the good qualities of her ladyship – especially in the work of education. The "health of the architect," "the church wardens," "the Rev. Dr. Smith," and "the visitors," having been duly given, the proceedings terminated. 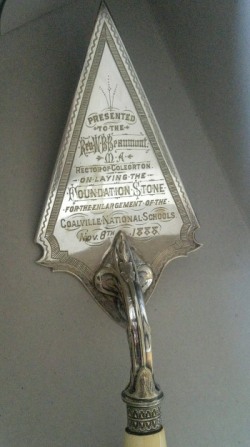 Not only the Lady Beaumonts were called into action to dedicate the foundation of new school buildings. In 1888 the Rev. Canon W. R. Beaumont (rector of Coleorton during 1864-1901) laid the stones of the extension to the National Schools in Coalville on 6 November. The trowel was made by W. W. Harrison in Sheffield, probably about 1888 when it was used.

The school was probably the All Saints CofE School on the Ashby Road, Coalville, which is still a Cof E School today.

"Presented to the Revd. W.B.B. Beaumont M.A.
Rector of Coleorton
on Laying the
FOUNDATION STONE
For the Enlargement os the
COALVILLE NATIONAL SCHOOLS
Nov 8th 1888"

Note: A "National School" was a school founded by the National Society for Promoting Religious Education. These schools provided elementary education, in accordance with the teaching of the Church of England, to the children of the poor. They provided the first near-universal system of elementary education in England and Wales. The schools were eventually absorbed into the state system, either as fully state-run schools or as faith schools funded by the state.

There were also schools run by non-conformists.

We have launched "the Coleorton Blue Plaque" scheme to commemmorate buildings and sites in the village which have historic significance.

We publish articles in St Mary's monthly parish magazine, Community News and on the Coleorton website.

Read some of the articles >>