During this strange time Rob & I have been spending much of it sorting through old research papers, magazines, memorabilia etc. in a not particularly successful attempt to downsize … and in so doing I came across a letter by the wife of Huntingdon Beaumont about her husband, to Sir Percival Willoughby in 1624 …

… And with thoughts of the approaching winter and the need to heat our houses, my thoughts turned to the open fires that were once enjoyed throughout the land, the coal that fuelled them … and the pioneers who developed the coal industry.

Huntingdon Beaumont who, compared to George Stephenson and Isambard Kingdom Brunel, is little remembered. He was born in 1560 the youngest son of Sir Nicholas and Anne Beaumont of Coleorton, prosperous land-owners with proved mining successes. Following in their footsteps and with a family background in the coal industry, Huntingdon too sought a career working with coal. As the family was already associated with the Willoughbys of Wollaton Hall (his father Nicolas Beaumont and Sir Francis Willoughby were in partnership operating mines near Coleorton), Huntingdon approached Sir Percival Willoughby in Nottingham, leased pits from and worked in partnership with him. Sir Percival was a distant relative of Sir Francis, had married his eldest daughter and inherited the Wollaton Estate.

Huntingdon was forward thinking and a great innovator in the mining industry. He developed ingenious tools to use in his mines: horse driven pumps; boring rods to locate coal beneath the ground before drilling shafts and between 1603 and 1604 he built the Wollaton Wagon Way, two miles of wooden wagon way tracks between coal pits. In 1603 Percival Willoughby records:

News has reached me of Master Beaumont’s efforts to move coal from Strelley to Wollaton Pits. His new invention will carry coal with wagons; with small wheels made from a single slice of oak, running on wooden rayles. I return home enlightened by this insight and possible cure for heavy loads our roads are yet unmade condition.

It is the earliest documented wagon way which was successfully used for a number of years until at least 1615. It has been credited as the world's first early form of railway. As a result he is known as the Great Grandfather of Railways.

However, Huntingdon was less successful in financial matters and lost considerable sums of money in heavy spending and in his business ventures in Nottinghamshire, Leicestershire, Warwickshire and Northumberland. A memory of him in the north occurs in a passage of The history of Newcastle by William Gray published in 1649:

Some gentlemen hath, upon great hope of benefit, come into this country to hazard their money in coale-pits. Master Beaumont, a gentleman of great ingenuity and rare parts, adventured into our mines with his twenty thousand pounds; who brought with him many rare engines, not known then in these parts; as the art to boore with iron rods to try the deepnesse and thicknesse of the cole; rare engines who draw water out of the pits; wagons with one horse to carry down coales, from the pits, to the staithes to the river, etc. Within few yeares, he consumed all his money, and rode home upon his light horse.

Huntingdon Beaumont was married to Joan sometime between 1614 and 1616. They had three boys; Nicholas, Francis and Huntingdon. A fourth son, possibly the eldest, died in infancy, also named Huntingdon.

It was on Sir Percival's estate that Huntingdon built Britain's first recorded railway, but after gaining little profit for the venture and with increasing debts, Willoughby did not renew Huntingdon's lease. Huntingdon moved north, where his luck in Northumberland also ran out. Hence his imprisonment in Nottingham Gaol for debt as an undischarged bankrupt. He died there in 1624.

The letter, that follows, was written by his wife Joan to Sir Percival Willoughby of Wollaton Hall in a poignant appeal to release her husband Huntingdon Beaumont's body from Nottingham Gaol. 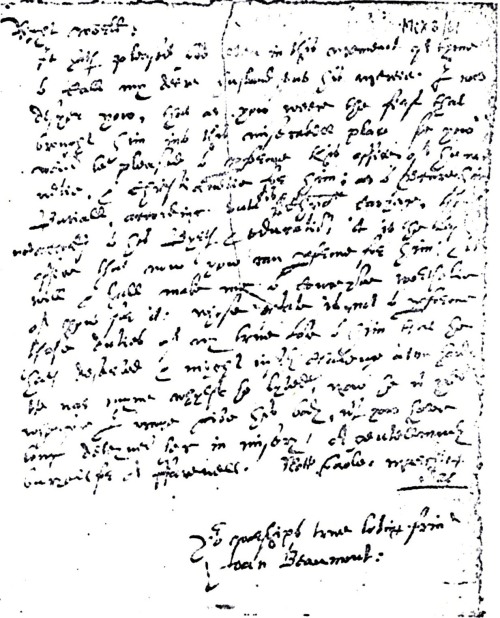 Right Worshipfull;
It hath pleased God, even in this moment of tyme to call my deere husband unto his mercie. I now desyer yow, that as yow were the first that brought him into this miserable place soe yow would be pleased to performe this office of humanetie, and Christianetie for him; as to procure him Buriall, according unto his Christian caryage, though not according to his Byrth and education; it is the last office that now yow can performe for him; and it will and shall make me to conseyve worthelie of yow for it; whose estate is not to performe those duties of my true love to him that he hath deserved and might justly challenge at my hande. He was myne whilst lyved, now he is yours wherfor I praaye give his body, which you have long deteyned in her misery. A gentellmans buriall for A Farewell.

And so Huntingdon Beaumont's long energetic, ambitious and entrepreneurial life with mining skills and business failures brought all of his hopes in Leicestershire, Nottinghamshire, Warwickshire & Northumberland to a tragic end, but he will be remembered as a Coleorton Beaumont and the Great Grandfather of Railways.

Despite his failings in business, Huntingdon Beaumont's legacy lives on and his early railway inventions went on to influence those that followed: the greatly revered engineers like George Stephenson and Isambard Kingdom Brunel.

Have you any questions - or any further information - about Huntingdon Beaumont? If so contact enquiries@coleortonheritage.org.uk