Fishpond Bridge stands on what was once the main road between Ashby and Loughborough in that part of Coleorton known as "Church Town". Its importance has now been superseded with the building of the new stretch of the A512 in 1994, which now bypasses the old road.

In the early part of the 19th C the Beaumonts in the person of the 7th Baronet Sir George Howland Beaumont returned once more to Coleorton having long been absentee landlords. The estate had been allowed to deteriorate under the hand of their agents and Coleorton Hall was in a state of sorry disrepair. Sir George's first action was to rebuild the hall under the direction of the Architect Sir Charles Dance and this was commenced in 1804. Along with this rebuilding came the laying out of the gardens and landscaping of the vista from the hall assisted by advice from Sir George's friend the poet William Wordsworth. As part of this project it was proposed to damn the small stream running from the South of the Village across the then Loughborough to Ashby turnpike road with the intention of creating a substantial lake, not only as a pleasing landscape feature, but also as a source of fish for the kitchens of Coleorton Hall and a place of recreation with a boat house on the Western shore. There is a story that when Sir George and William Wordsworth were trying to decide on the shape of the pond, Wordsworth spilled a glass of wine on the table and that became the shape decided on. However, it seems more likely to the author that the shape of the pond was dictated by the topography of the site rather than by deliberate design. Whilst the original stream was probably passable by a shallow ford, the damning work required the building of a substantial bridge and this was constructed ca. 1826 using local sandstone. With the passage of time the original two arch, single track bridge became unsuitable for road traffic and in 1938 the original bridge was dismantled, each stone was carefully numbered, the central section was rebuilt and widened using the original stones in order of their removal and two new arches added on either side with one arch fitted out as boathouse with mooring rings set in the walls. 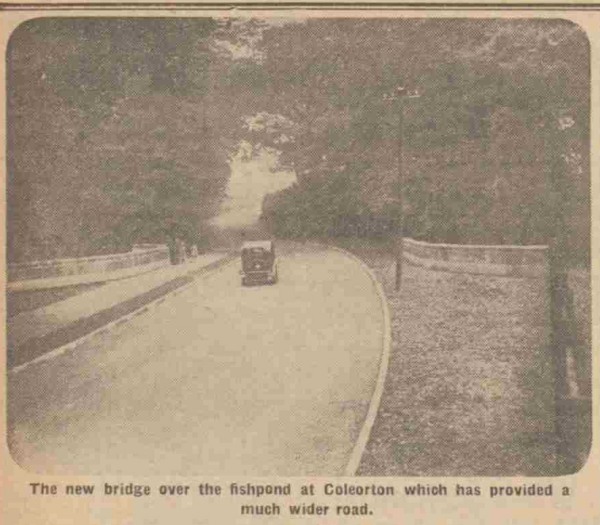 Old Coleorton residents recall times past when winters were harder than today and after three weeks or so of frost the thickness of the ice would be tested with a drill and if considered safe adults and children would flock to the pond, candles would be placed in jam jars around the perimeter and people would slide and skate into the evenings by candle light. It must have been a wonderful sight to behold. In the summer village children might engage in fishing, rafting and swimming in its waters. One old Coleorton resident the late Jack Redburn recalled a summer time sport in which the 11th Baronet Sir George Arthur Hamilton Beaumont offered the reward of a ham to anyone who managed to get from one side of the pond to the other sitting on a lard covered log. I doubt many hams were awarded, but it would certainly have been fun to watch and that was perhaps the whole point!

Over the years the fishpond was subjected to gradual silting up and in 1926, during the great strike, the 10th Baronet paid out of work miners to clear the pond and dump the muck in the adjacent field of what is now part of St John's graveyard. The pond was not cleared again until 2010, but in these more environmentally aware times the silt was analysed and found to contain unacceptable levels of mercury meaning it could not be dumped on the fields. In times past the stream feeding the pond had received the drainage water pumped from Coleorton Colliery. Coal contains small amounts of mercury and this would likely been the source of the contamination, indeed, modern coal fired power plants are fitted with active carbon filters to remove mercury vapour from the smoke stacks. Apart from fish, I have also been told that one Coleorton resident would collect fresh water mussels from the shore for the table, perhaps not so wise given the mercury would have been concentrated in these filter feeders!

Examination of the original stonework of the central arches shows the remnants of substantial iron railings atop the parapet, a 1936 photograph shows these must have been removed some time before the bridge was rebuilt. But what was their purpose, why add railings to what was already a substantial parapet? Perhaps the answer lies in the ponds darker history with a number of suicides and accidental drownings recorded in its waters. Were the railings an early "Heath & Safety" safety measure?

The fishpond is home to frogs, smooth newts, great crested newts and, most famously, toads with up to 7000 adults formerly breeding in the spring. Disaster threatened the toad population in 1991 with the decision to build the bypass on the A512, which actually passes through the Northern section of the pond. Local biologists advised on steps to help the migrating toads, but these were largely ignored in favour of a pipe tunnels under the road. These are used by young toads moving from the pond under the road in Summer, but are too cold for adults attempting to move back to the main pond to breed in early Spring. Since 1994 there have been efforts to alleviate this problem by catching adults each Spring and carrying them over the road in buckets to the main pond, but as seen by declining numbers each year it seems to be a losing battle.

"Memories of Coleorton" published by the Coleorton Heritage Group, copies available from Sandra Dillon on 01530 440000 or enquiries@coleortonheritage.org.uk